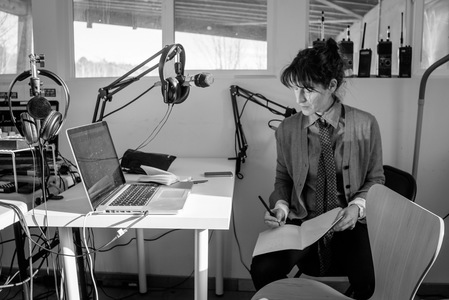 Suzanne Snider is a writer, documentarian and educator whose work is deeply influenced by oral history theory and practice. Her most recent projects include sound installation, essays and archive design. In 2012, she founded Oral History Summer School in Hudson, New York to explore nontraditional applications for (and experimental outcomes of) life history and collaborative narrative practices. She regularly runs trainings around ethical interviewing in settings including medical schools, museums, libraries and veterans hospitals. Her writing/audio work can be found in The Guardian, The Believer, The Washington Post, BOMB and Guernica among other publications and is also included in several anthologies and artist catalogues. She is the co-founder (with journalist Allison Lichter) of the Trauma and Journalism Workgroup, which seeks to support journalists and documentarians reporting on trauma and violence-centered stories.

She has received support for her projects from Yaddo, the MacDowell Colony, the Mellon Foundation, the New School and the Radcliffe Institute/Schlesinger Library. After receiving an MFA (nonfiction) from Columbia University (2003) as a Hertog Fellow, she pseudonymously published a book with Grove Press in 2004 (reprinted by Random House Japan 2005).

Prior to her work with adult learners, she taught in the New York City public school system for five years at alternative elementary schools and developed/implemented movement arts curriculum for visually impaired students (k-12) at the New York Institute for Special Education. Currently, she teaches at the New School University and is completing a book about a divided commune in Middle America. She is also completing coursework in Integrative Somatic Trauma Therapy.